All Collections
General FAQs
Your First Playtest
How many game genres are there?

How many game genres are there?

A guide to our 47 game genres, here's where you'll find some of the games included in them.

Written by Jack Dunne
Updated over a week ago

Packed to the brim with narrative, leveling up your character and lots of battles we focus this genre entirely on PC and Console players and have another for mobile gamers.

The biggest trend in PC/Console gaming in 2018! The battlefields shrink and ammo gets harder to find while hundreds battle it out!

Focus, focus, focus. These games are much more than just time killers!

Popping balloons, bubbles and whatever else comes into your path. A tried and tested game mechanic that everyone can enjoy

Battling with your collectable character cards is the order of the day here. With lots of titles expected to be coming out in the coming months as well as some old favorites.

Strategy games without the endless resource types and intense battles, this ever popular category focuses more on collecting items and growing your base. Ever popular with its generally playful graphics!

With simple mechanics that are easy to learn and master, these sports games are a home-run with players of all skill levels.

Managing a restaurant has never been so easy! Or has it? Keeping customers happy and avoiding long wait times while discovering new dishes is exactly what the chef ordered!

Dressing up characters and designing rooms has been a trend which has gained serious momentum among mobile games recently.

You'll find the biggest names in sports games here. Unlike Casual Sports games, these games have a steeper learning curve and require a higher level of skill.

Timers, finding needles in haystacks and in depth storylines. These players will generally have good time management skills and know when to use a booster.

The biggest trend in mobile game in 2018 shows no signs of slowing down. Games that can be played for as little as 10 seconds which keep you coming back for more!

Virtually impossible to lose in with instant gratification, Idle Clicker games are played in offices all over the world!

Getting lost in a good book is so 2009, now it's all about picking your characters and choosing their fate.

Living the life of one or more virtual characters, where players get to craft their story, and start from fresh if it all goes wrong!

These games use both AR and player location to create a truly immersive experience. This is a very young genre, with some very exciting titles!

Drag and drop matching items to create a new item—that's the basic rule of any merge game. Whether it's merging plants, shoes or the ingredients for cookies, this simple mechanic has been featured in many new games in recent years.

Create your character and team up with others to overcome the next quest on your list! Usually free to play, with endless open-world possibilities for you to explore.

Core games: League of Legends and DOTA (Defence of the Ancients) 2.

Like the console version, loads of story lines and fun battles. We’ve noticed that these players differ slightly to people who play on console. We’re really excited about the upcoming offerings from Bethesda with Elder Scrolls: Blades and Blizzard’s Diablo Immortal.

Lots of similar characteristics with Action RPG games. The difference here is within the core gameplay mechanic. Our mobile RPG games are turn based, so no running around hacking and slashing your way through levels here!

Got good aim, a steady hand and desire to hit deer, your friends or some clever bots?

Core games: Deer Hunter, Modern Combat and Into the Dead.

Up until very recently the gap between mobile and PC/Console strategy games was huge. The gap is still there and present but the mobile strategy market is really taking off!

Clash of Clans set the stage here and many have gone on to achieve great things in this genre. Time management and battle skills are essential player traits. Don’t forget to level up your heroes!

Dancing, singing, tapping all to the beat! Good coordination and multi tasking abilities are required to get far in these games.

Huge maps that are ready for you to create massive empires on and battle all sorts of enemies in far away or ancient lands. Hugely popular on PC with players that show real dedication and very good resource and time management skills.

Use tactical prowess and the right weapons to defeat the enemy. This genre is made up of popular shooter games played on PC/Console.

We’ve got the questions. Have you got the answers?

One of the classic genres, loud engines and even louder fans! Great coordination skill needed here!

Rovio kicked it off on mobile with Angry Birds, now there are plenty of titles that get players with good aim picking up their phones every day. There are some great PC and console titles in here too.

Winner winner chicken dinner, these players love one mechanic and one mechanic only! But they’re able to spot a pattern almost anywhere!

The rest of your favourite casino games, roulette, poker, bingo and much more.

This genre of games bring sports fans out of the stands and into the game. Two sports genres—Franchise sports games and Casual Sports games—fall under this category.

The aim of the game is to explore, gather, craft...and survive! Survival games will usually find players in an open-world, and somewhat hostile environments.

Core games: Subnautica, No Man's Sky and 7 Days To Die

Managing a whole team of characters offers a different take on the RPG genre. Team management skills are enough for us to separate these games from the rest for us.

A classic format that requires players to be very smart with their resources and upgrades.

Another genre loaded with classic games, these titles require good thinkers who can work well under time pressure.

This last section is devoted to some of the most popular mobile games around. We had to split up Puzzle games into a multitude of different sub genres.  In the order
form it works a bit like this: 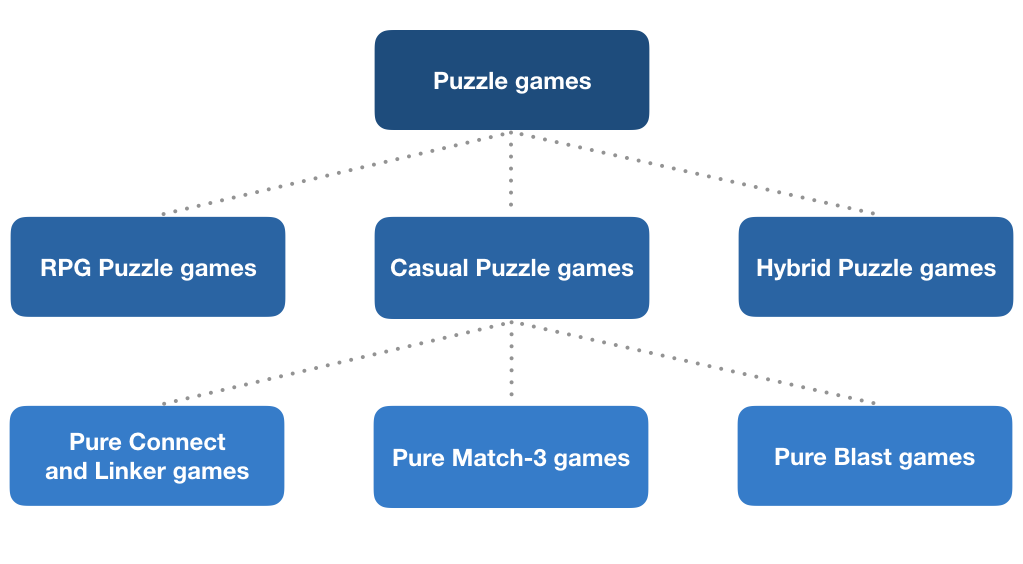 People who play any titles in the Hybrid, Puzzle RPG or Casual Puzzle genres.

Some of the most popular mobile titles of the past few years. Adding a story driven element to the already well tested mechanics!

The final piece in our RPG puzzle! Taking popular mechanics and giving them a place in battle!

This mechanic could be considered the godfather of mobile games! Lots of great titles here that have kept players enticed for years!

Very popular among casual players. Lots of people prefer the explosive side of blasting tiles!

These games shy away from tiles and let you make some more interesting angles!

To round off our game genres we have the champions of casual games! Many have tried to take their throne but King.com have maintained their position as market leaders for a very long time now. This genre features all of their popular games

We can help! Send us a message and we'll help :)